Marco Aurélio Raymundo is the man behind the Mormaii brand. A keen surfer, he developed his own wet suit from neoprene to combat the cold waves. He made some for his friends and it escalated from there, soon to become the largest neoprene clothes producer in Latin America.

The Mormaii brand went from strength to strength, also becoming involved in the sports of kitesurfing and motocross. Jeans, watches and bikes all bear the logo as well as the infamous sunglasses, many, like Ipanema and Itacare are named after the wonderful beaches in Brazil. One of the more popular sunglass frames for watersports is the Mormaii Floater because, as the name implies, they are designed to float, so when you take a tumble you can be sure of never losing them in the surf. 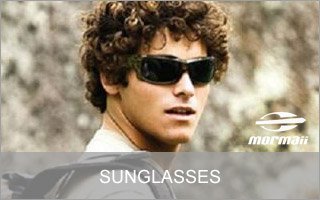